Using the body as an instrument for protest, the badge becomes a means of rendering our own voice visible in an otherwise faceless technological panopticon

Since the formation of the nation-state, state surveillance of some form has been part of our lives. Today most countries across the world have specialised and well-funded agencies tasked with watching their citizens, from the GCHQ in the UK to NATGRID in India and the now famous NSA in the United States.

However, it is the tools and techniques at the disposal of these agencies that have undergone the most radical change, taking full advantage of the increasingly networked nature of our lives. The NSA, GCHQ and other government security services secretly collect and scan our personal information and correspondence for trigger words; from the overtly malevolent: 'anthrax', 'assassination' and 'bomb' to the seemingly benign: 'pork', 'dock' and 'storm'. According to a top-secret heat map published by The Guardian and produced by the NSA's Boundless Informant program, almost three billion data elements from inside the United States were captured by the NSA over 30 days ending in March 2013.

In response, Open Informant attempts to confront the unsettling realities of surveillance in a networked age. It is a phone app and e-ink badge. The app searches your communications for these NSA trigger words and then sends text fragments containing these words to the badge for public display. Using the body as an instrument for protest, the badge becomes a means of rendering our own voice visible in an otherwise faceless technological panopticon. By openly displaying what is currently taken by forceful stealth, we question the intrusive forms of mass surveillance adopted by democratic nations on its own citizenry, and in the process, shift the conversation around wearables from being about you and your body as a machine, to the culture of machine intelligence and algorithmic monitoring. 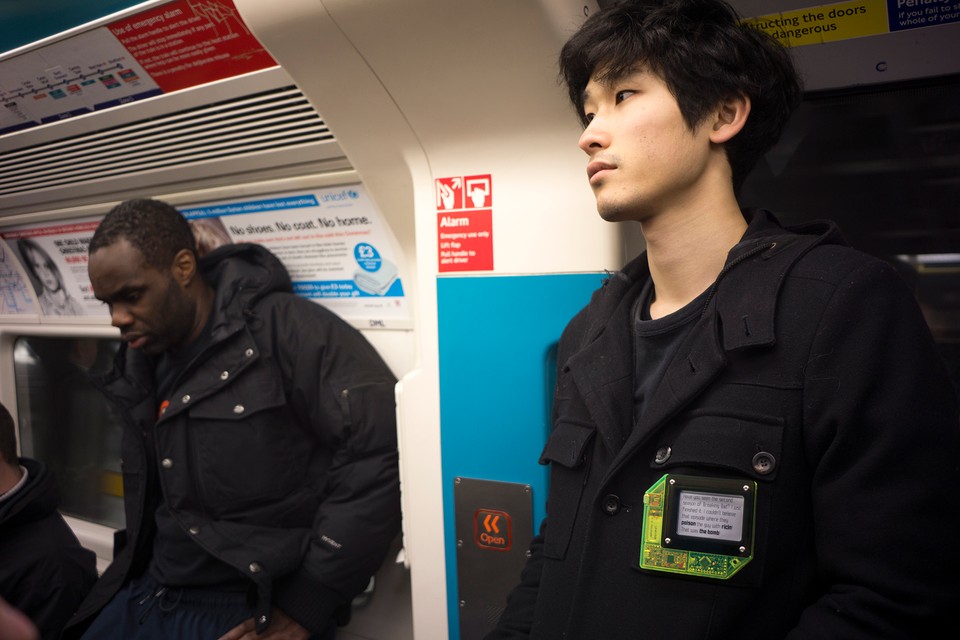